Africa is a continent with a special place in many people’s hearts. This was not different for Dick Bouman, Aqua for All’s Regional Manager Horn of Africa. Looking back at Dick’s career spanning over 40 years, one cannot deny the close relation between him and water in Mozambique. Dick was a co-author of the national groundwater map produced in 1987, which is still in use. This made him a vested name among many water experts in Mozambique.

Dick’s blog has been posted in two parts. Part 2 focuses on the last two decades of his experience in Mozambique.

The period between 1998 and 2010 brought big changes to the water supply in the larger cities in Mozambique.

In 1998, I left the water sector and Mozambique for seven years. In this period, I worked on humanitarian aid in the Balkans, development in Eastern Europe, and finally on policy issues.

In the same year, the new Delegated Management Framework required that the operation of water supply services in larger cities would be contracted out to private companies as concessions. The Fundo de Investimento e Património do Abastecimento de Água (FIPAG –  Water Supply Asset Holding and Investment Fund) was established to act as asset manager on behalf of the government and to be the contracting agency for the concession companies. Next to FIPAG, a regulator was created to protect the consumers/end-users.

Several international companies won the tenders. This privatisation was however not successful and contracts were ended prematurely for all cities, except for Maputo. In this context, FIPAG assumed the responsibility for the utility role. At that time, the partnership between FIPAG and the Dutch Vitens Evides International (VEI) started to build FIPAG’s capacity to perform the utility services. 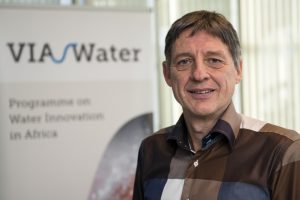 Since 2002, these public-private partnerships in the water sector were promoted by the Dutch government to contribute to achieving the Millennium Development Goal 7 on water and sanitation.

It is interesting to mention that the decline of service level was reversed during this period. Access in urban areas showed an enormous increase. However, this was partly based on wrong assumptions about the functionality of public standposts and the number of people using them.

In this decade, the Dutch policy on international cooperation was guided by neo-liberalism (free market processes) and a shift from project funding towards a sector-wide approach, in which budget support became dominant. The sector-wide approach was implemented in Mozambique under the name ASAS (Apoio Sectoral no Abastecimento de Agua e Saneamento). Project-based support also continued, using different instruments to facilitate the involvement of Dutch companies and NGOs, like bilateral contracts. In this way, Dutch development aid could still favour Dutch trade.

By the end of 2006, I joined Aqua for All, which brought me back to the water sector and Mozambique. My work included supporting Water for Life projects in FIPAG towns in Mozambique, implemented by Vitens Evides International. These projects aimed at expanding  water services in the peri-urban areas. Initially, my role was restricted to being a well-informed funder, but after 2010 I became much more actively involved.

By 2010, the Dutch policy on international cooperation became heavily criticised by several political parties in the Netherlands. As a response, the policy made a major shift towards an ‘aid and trade’ agenda. In theory, this would contribute to transforming aid relations into trade relations in those countries with the potential to climb up from the Low Income Group to the Middle Income Group. This also meant using aid funding for involving the Dutch private sector to prepare such countries for this new relationship. Mozambique was perceived as a country that could grow away from the group of Least Income countries, as it foresaw a huge economic growth, based on coal exports (and later gas exports). 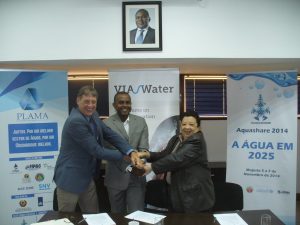 Due to its close ties with the Dutch water sector, Aqua for All was invited by Hystra, a French consultancy company, to participate in a study on access to water. The study identified market segments in which the private sector could make the largest contribution. Based on the outcomes of this study, Aqua for All was asked to join an advisory mission for the Multiple Annual Plan of the Netherlands Embassy in Mozambique as consultants. The goal was to contribute to a strategy to increase the involvement of the (Dutch) private sector. My initial conclusions were that for the water sector, there were few private players, mainly in the area of consultancies and big constructions. A few positive signs were glooming, such as the creation of PLAMA to stimulate better coordination and cooperation between the public and private parties in the water sector.

The debacle of the privatisation of the urban water supply showed that such privatisation should be better prepared and more gradually. A new privatisation attempt was planned for the smaller towns, for which the Administração de Infraestruturas de Abastecimento de Água e Saneamento (AIAS) was established in 2009. AIAS would focus on water supply in about 150 smaller towns and sanitation infrastructure in all towns and cities. In reality, it meant upgrading water infrastructures in towns to a basic level. Afterwards, operations would be contracted out to private (or autonomous public) enterprises under an expanded Delegated Management Framework.

Together with SNV and BOPInc and the Dutch utilities VEI and WorldWaterNet, AIAS developed a capacity building/start-up project for 15 smaller urban towns, which was funded by the Netherlands Embassy. The Netherlands Embassy asked me to participate assessing this proposal. This resulted in a conditional approval with an inception period with clearly defined milestones and deliverables. I remained as an external reviewer for this programme for several years, next to other assignments related to the cooperation between FIPAG and VEI.

Despite of its many challenges, the AIAS programme had sufficient good results. Today, it is in its third phase, aiming at half of the almost 150 towns under the AIAS mandate. The programme started working with few, not fully-developed Mozambican companies, but it has now been able to contract more mature companies holding the concession in individual towns.

With a 50% coverage, the sector is now preparing for a major boost. A planned Water Fund will channel additional investments, and the expansion and operation in the 150 towns will probably be implemented through three regional concessions. Nevertheless, I foresee a long way before the private water sector in Mozambique is ready to compete in such big tenders. As a result, the role to foster sector development – originally meant for Mozambican-owned enterprises – was taken over by international companies. The same will happen in larger towns, actually served by FIPAG. The World Bank has pushed for privatising operations that will also be brought under three regional concessions.

The sector-wide approach was ended because of poor administration capacity at the central directorate and a tight control imposed by donors after the hidden debt scandal in 2016 – a fraud of more than €1 billion at government level. The Dutch project support was continued through AIAS and FIPAG, a segmented IWRM programme and a cluster of projects to make  Beira city more climate resilient. Rural water and sanitation initiatives, formerly supported by UNICEF programmes, were phased out.

In August 2022, almost at the end of my career, I returned to the water resource sector and joined the MDF team for a mid-term evaluation of the IWRM programme supported by the Netherlands Embassy. While the sector-wide approach had the potential to allow the Mozambican authorities be back again on the driver’s seat , the set-up of this IWRM programme had brought Dutch develop aid back to mid-nineties approach.

Looking back and forward 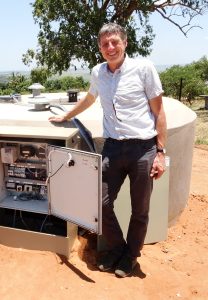 Not long ago, I read a dissertation on the implications of the Dutch Aid and Trade policy for the bilateral relations in water in Mozambique. I was pleasantly surprised that the map I co-produced in 1987 was presented as a kind of icon of the initial cooperation.

Reflecting on this research, I realised the context of the water sector in Mozambique left a mark on my career. In the early eighties, it was permeated by a rather socialist environment. However, this influence ended a few decades later when I embraced and stimulated the role of the private sector in water services. Nevertheless, it is fair to say I only played a limited, yet very modest role in these processes.

“Aid and trade” was promoted in 2011 as a new approach, but in reality this dualism has always been embedded in the international development cooperation. A transition to a more balanced and mature relationship is very much required, but it should include a shared agenda and be done taking small steps that could be followed by local partners, including the private sector.

The water sector in Mozambique has developed over the years. It has followed the international trends. Sometimes, it was among the frontrunners in applying new approaches. Due to internal and external challenges, the sector faced problems to live up to its ambitions. In the future, it needs to find ways to overcome its dependency on donors and large foreign companies, and to follow a development path that fits with its own institutional capacities, both public and private.

During my career, I followed a similar trend based on what I have witnessed first-hand. In these four decades, my career and the sequence of the concepts I favoured have much in common with the trends in water that were developed and applied in Mozambique.

Looking back to these four decades, I feel proud of my contribution and commitment to increase access to water in Mozambique, and for the sincere appreciation that I still receive for the quality of my work.

Dick Bouman worked for Aqua for All from 2006 to 2022. In October 2021, he published a blog to celebrate his 15th jubilee at Aqua for All and his 40th work anniversary. Read the blog to learn more about Dick’s work in Tanzania. You can access Part 1 of this blong through this link.