Africa is a continent with a special place in many people’s hearts. This was not different for Dick Bouman, Aqua for All’s Regional Manager Horn of Africa. Looking back at Dick’s career spanning over 40 years, one cannot deny the close relation between him and water in Mozambique. Dick was a co-author of the national groundwater map produced in 1987, which is still in use. This made him a vested name among many water experts in Mozambique.

Dick’s blog has been posted in two parts. Part 1 focuses on the first two decades of his work in Mozambique.

After 35 years, I have never expected that water experts would remember me. But when I visited Mozambique in July 2022, I sat next to two senior officers of different water directorates. Upon introducing myself, they reacted very enthusiastically and asked if they could have a ‘selfie’ with me.

In the following chapters, I give a personal review of the water sector development in Mozambique. I divided my reflections in different decades in which I elaborate how I was connected to these developments (trying to respond: ‘where was Dick in that decade?’). For the historical summary, I made extensive use of Chris Buscher’s dissertation (2021) who used the water case in Mozambique to analyse the implementation and impact of the Dutch Aid and Trade policy.

The Mozambique-Netherlands bilateral relationship started in 1973, one year before Mozambique’s independence. Back then, Jan Pronk, Netherlands Minister for Development Cooperation, brought more social politics in development cooperation policies, besides the traditional aid and trade agenda. Mozambique became one of the socialist donor darlings, next to Nicaragua and Tanzania, for example.

From 1975 to 1985, foreign support for technical assistance was dominated by expatriates (DGIS staff and volunteers) working within the local ministries and parastatals. Water was a priority of the bilateral agenda, which was guided by the Mozambican government and supported by the Eduardo Mondlane Foundation. Dutch private companies were not dominantly present. However, DHV had a large sanitation and drainage project in Maputo, Euroconsult was involved in developing irrigation systems and IWACO provided support through groundwater studies around Maputo.

The start of a long relationship with Mozambique 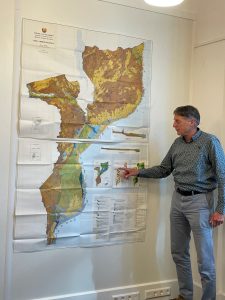 My career began in the second half of this decade in the Netherlands. Instead of military service, I did social alternative service in 1982 and 1983 to support the water association ‘Werkgroep Waterbeheer’, which was linked to the Eduardo Mondlane Foundation. This was the start of my involvement with Lusophone (Portuguese speaking) Africa. This service was followed by a 3-year volunteer contract with the National Directorate for Water. I was contracted to do field work for groundwater studies in the Incomati  Basin, but reality turned things differently. The civil war confined me in Maputo to do desk studies.

My final deliverable was the co-production of the groundwater map of Mozambique1. For this, I teamed up with Dr Ferro, a senior Portuguese geologist, and Justino Bahane, a junior staff member. In 1989, I returned for two months as a consultant to prepare an evaluation of the  Maputo drainage and sewerage project supervised by DHV.

The second decade in Mozambique was marked by the country’s transition, which was driven by an economic reform imposed by IMF and World Bank. Mozambique had more or less landed in bankruptcy as a result of internal war, economic and political failures, and natural disasters. This reform was one of the most radical ones in Africa. Dutch development aid was mainly meant to soften the harsh impacts of this policy and to provide humanitarian support. In this period, the role of the Netherlands Embassy grew in relevance. By the end of the decade, the Dutch water agenda was relatively wide and included integrated water resource management (IWRM), water governance and drinking water and sanitation in both urban and rural areas.

From 1989 to 1997, I did several consultancies, which varied from formulation missions for humanitarian aid for returnees (1992) up to evaluations of the drainage and sanitation project implemented by DHV, academic cooperation and the production of wind pumps. The fact that I speak Portuguese and my understanding of the local context were clear advantages for these assignments. These trips kept me also up to date with the local developments and gave me the chance to visit other provinces than Maputo.

A modern water sector for Mozambique

In 1991, Mozambique passed its first Water Law, with a major emphasis on water resources and establishing water basin authorities. This made Mozambique a frontrunner regarding institutional water reform in Africa. However, while legal reforms in Mozambique were often advanced, their implementation was rather slow and with ups and downs along the road. Initially, the donor community for water remained supportive to the public sector, but by 1995 the spirit of delegated private management entered Mozambique. At first, small private initiatives popped-up in the peri-urban areas of Maputo, where migrants used their earnings to invest in a borehole for the family after which the service was extended to their neighbours. At the other end of the spectrum was the preparation for large concessions for drinking water in the main urban cities. At the end of the nineties, the level of water services was at the lowest point and projects were unable to maintain even the most basic services. 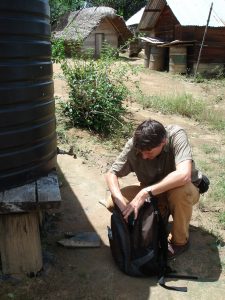 In 1996 and 1997, I led a research on models for improved water services in the peri-urban areas in seven cities. I advised the authorities to embrace small private operators instead of combating them. Looking back, I realise it was a too-early call: the conflict between these growing number of private ‘POPs’ (pequenos operadores privados – small private operators) and formal utilities lasted for more than a decade. But for me, these were the first steps towards considering that the private sector could have a role, even for servicing poor people. However, this could only be possible if services could be well-channelled and offered at fair and affordable prices; not at the ten times higher tariffs that poor people in developing countries usually pay to illegal vendors. Privatisation in Mozambique would start shortly after this consultancy, but at a complete different level than in my vision for the peri-urban areas.

Dick Bouman worked for Aqua for All from 2006 to 2022. In October 2021, he published a blog to celebrate his 15th jubilee at Aqua for All and his 40th work anniversary. Read the blog to learn more about Dick’s work in Tanzania.