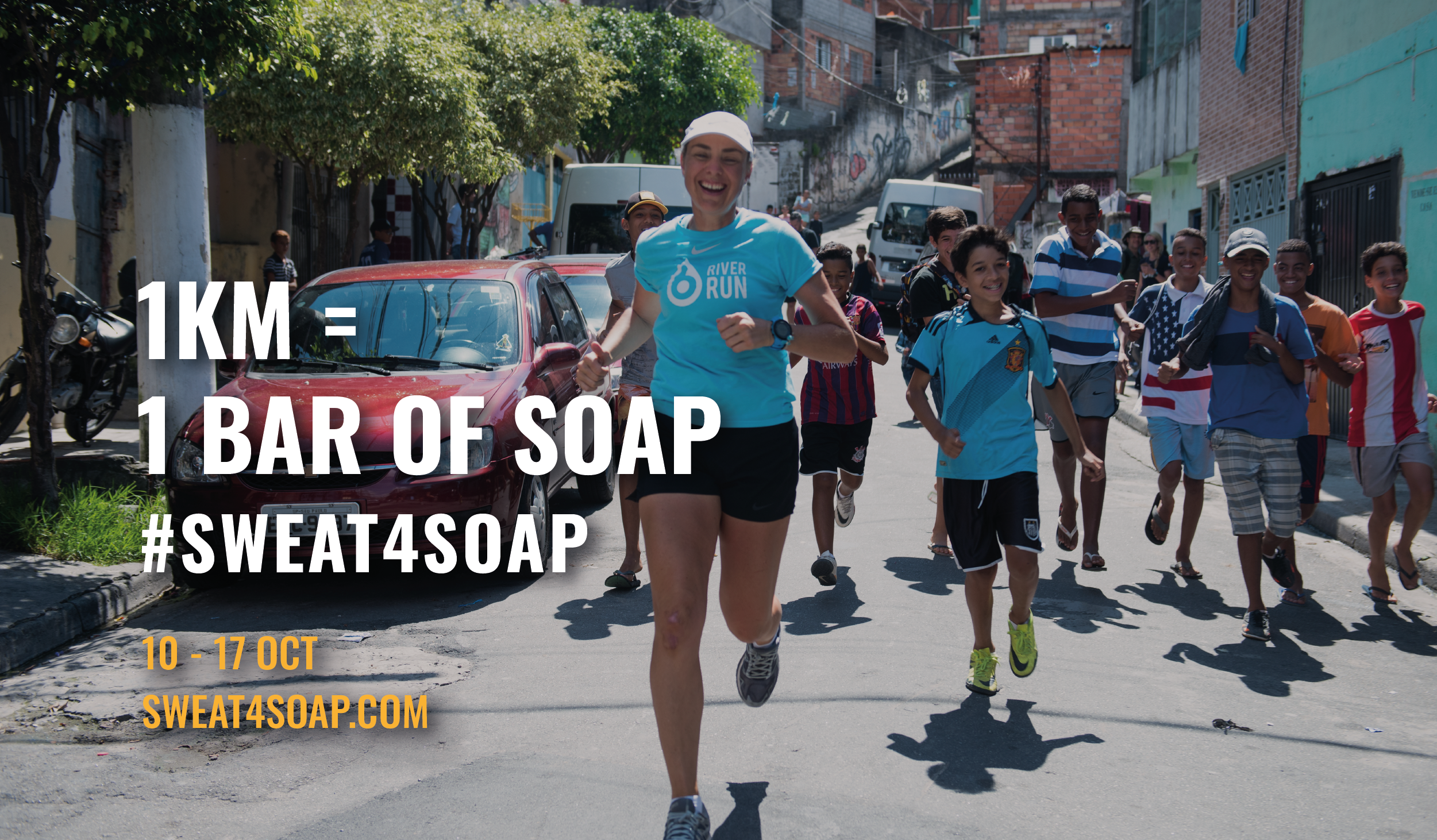 From having no interest in running and sports as a child, Mina Guli proceeded to run several marathons to raise awareness about the global water problem. When asked if she ever gives up, Mina responded by saying “When you have seen what I have seen and been where I have been, there is no option but to keep going!”. To commemorate her 50th birthday (October 10) and the Global Handwashing Day (October 15), Mina launched #Sweat4Soap, a week-long campaign from October 10 to October 17.

Aqua for All supports Project Maji and helps them with the provision of hand-washing stations for this initiative. Mina’s fervour and commitment to the water sector is highly admirable and we are excited to provide our support to this campaign. Here is Mina’s story:

Could you tell us a bit about your background and how you came up with the idea of running to generate awareness about the global water problem?

I grew up in Australia, through ten years of drought. I knew that water was really important but what I did not understand was how much water goes into the things that we consume every day or how big the water crisis is. I realised that many people were just as unaware as I was and I set out to cure this water blindness. I started by running an education programme in China but I soon realised that this water problem needs to be solved right now and not when kids are in a position to run a company in thirty years’ time.

I realised that I had to do something crazy to get people to become more water-enlightened. In 2016, I decided to run across 7 deserts across 7 continents in 7 weeks. I received many accolades and awards and I found my name in the top 50 world leaders alongside the likes of the Pope and Angela Merkel which was pretty amazing but it was not solving the problem and no award was realising access to water for the future generations.

In 2017, I decided to run 40 marathons in 40 days along the six great rivers on six continents to raise awareness about SDG6 (Clean water and Sanitation). I picked 40 because there is a forecast of 40% gap between the demand and supply of water, 40% of people in the world do not have access to water, and the distance of a marathon is a bit over 40 kilometres. After this feat, people were talking about water which was great, but they were still not acting on the issue.

I wanted people to stop making excuses and have 100% commitment. In 2018, we came up with the idea to run 100 marathons in 100 days across some of the world’s most water-scarce places where there were people, stories and communities we could bring attention to. By the time I got to day 62, I was severely injured. My team decided to carry the burden of the water problem and run for me. Soon, people around the world started to run and by the time we got to day 100, thousands of people had run marathons from all over the world.

Running helped me build a community for this purpose. When people realised that there is this crazy woman who wants to run 100 marathons in 100 days when she does not even like running, they were curious and then they became more involved in the conversation about water. I wanted to show what it takes to solve these big global problems. Pushing myself beyond my comfort zone helped me push companies, investors and policymakers beyond what they traditionally accepted and found ways to make real change happen.

You have undoubtedly had many interesting experiences throughout this journey so far, but could you tell us about your most memorable moment?

When I was running in the Richtersveld desert in South Africa, we had to cross the Orange River and the plan was to drive the vehicles on the barge to cross the river. As I was running down the slope to the river, I was stopped and informed that the car was stuck on the barge because the river was low, and there was not enough water to take the barge across with a car on it. I assumed it was because of drought but I was informed that it was because of water use. It turns out that there was a company growing grapes on the other side of the river, in the middle of this desert, and they were using up all the water to grow grapes that would end up on plates in Europe, the US and other parts of the world. When I stood on the bank of that river, talking to the locals, I realised that this was outrageous and this is not the world I want to leave for the future generations. That day, I decided to spend the rest of my life working to solve this problem so that the next generation will grow up into a world where their future is not limited by access to water but by their ability to dream big.

What is your ultimate goal for the WASH sector?

I have two goals. The first one is that on March 22, 2023, when the UN hosts a big conference on water, companies, investors and policymakers make enough commitments to reach all the SDG6 targets by 2030. My second goal is to see a world where the water crisis is solved, where the challenges that we are facing as a community are gone, where the demand for water is equal to our supplies available, where water coming out of manufacturing companies is cleaner than the water that went in, and a world where everyone has access to WASH.

To kick off your 50th birthday on October 10 and the Global Handwashing Day on October 15, you launched the #Sweat4Soap campaign. We are excited to partner with you on this brilliant initiative. Could you tell us a bit more about this campaign?

I have been thinking a lot about what it means to have access to water during the pandemic. Some of us have access to water and sanitation but 3 billion people do not have this luxury. This year on my birthday, I want to give back and help to improve the lives of others on this planet. The idea is to get people to walk and run and for each kilometre, we donate a bar of soap to someone in need. In addition to this, we recognised the need to provide handwashing stations. For every 100 kilometres walked or run, we will donate a Maji bucket (a zero-touch handwashing station) to a community in Ghana. People can get together in small groups, walk or run 100 kilometres together over the duration of one week. We want people to share their runs and walks across social media platforms, to encourage others to join in and support this cause.

Join the movement and convert your steps into soaps and Maji buckets! For more information, check out www.minaguli.com